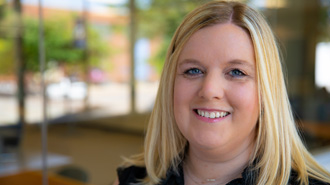 Jennifer Schultz is a two-time CSP graduate who earned her bachelor’s in communication studies in 2011 and her master’s in sport management in 2016. Schultz knew she wanted to pursue a career in sports and felt that a degree in communication studies would give her the best all around-education in journalism and broadcasting while also allowing her to blend it with sport management. Today, she is an academic coach with Athletes Committed to Educating Students (ACES)  ACES, a fan experience assistant with the Minnesota Timberwolves & Lynx, and a contributing writer for HerTrack. At Concordia, she found her footing as she sought to combine her love for sports with her passion for making a difference.

A Love for Sports

Schultz was looking for a school with a sports communication major in a large city close to home. Since she was already living in the Twin Cities, she felt staying in the area would be a good fit for her, and she discovered Concordia’s program.“I went into the communication studies program hoping to blend the sports information and journalism tracks together to fit my goal of starting a career in sports journalism, particularly in broadcasting,” she explained.

When she enrolled, she envisioned herself working in a media setting. Throughout her internships, she was able to find out what she really enjoyed and what she enjoyed more in theory than in reality. Her time at CSP helped her focus on her goals and find her footing on her career path.

“The relationships I built with professors and students have helped me make more connections that have led to career opportunities,” she said. “Most importantly, my time at Concordia taught me that relationship building is a strongly held value of mine and is something I wanted to be an integral part of whatever career path I chose.”

Along with spending time honing her relationship-building skills, Schultz discovered a new passion during a group project in her intercultural communication class.

“My passion for sports is something I knew I wanted to cultivate into a career. However, I had never really considered working with youth or in education,” she admitted.

Her class worked with Plus Time, an after school program close to campus where her class helped the children with their homework, assisted the site leaders with activities, and engaged students in games and other projects.

“These CSP service projects were really the foundation of my discovering a passion for community involvement and how personally fulfilled they led me to feel,” she reflected.

It was also the first time she had considered tutoring or mentoring youth. Fast forward several years after graduation while working with the Minnesota Timberwolves and Lynx organization and Jennifer was actively seeking that experience. She found it when a coworker connected her with the ACES organization.

Through ACES, Schultz discovered that her love for sports could directly power her desire to make a difference in the community. As an academic coach, she has a class of middle school students who participate in a morning program before their traditional school day begins. Through ACES’ curriculum, she and other coaches and teachers utilize sports and other team concepts to teach middle school students in underprivileged communities.

“I’ve always been interested in volunteering and giving back to communities,” she said. “I knew I wanted to make it more than just something I did in my free time when I saw the impact and relationships I could create with empowering youth through education and sports.”

Prepared for Her Purpose

Both of Schultz’s roles with ACES and the Minnesota Timberwolves & Lynx allow her to continue utilizing the skills she learned in CSP’s sport management program. She is actively involved with fan experience, event planning, and social media marketing as well as being involved in community initiatives. Her communication studies classes have been integral as well.

“The communication classes I took during my time as an undergrad provided me with some of the most beneficial skills I use daily in the classroom,” she noted. “I work a very diverse middle school where I have students from many cultures and backgrounds. The concepts I learned in my intercultural communication class have made me more sensitive to the differences in styles and etiquette of communicating across cultures.”

Her interpersonal communication class has also proven essential as she has developed strong relationships with the students in her class.

“My background in communication has allowed me to help them use their voices in a positive way that is powerful and impactful,” she expressed.

While her path looks a bit different than she envisioned when she began at CSP, she has the skills and experiences to propel her forward.

“This is where you really learn the most about yourself – what your strengths are and where your passion lies,” she emphasized. “My career path is different than I envisioned, but the relationships I built and the new opportunities I experienced led me to something greater than I ever imagined.”