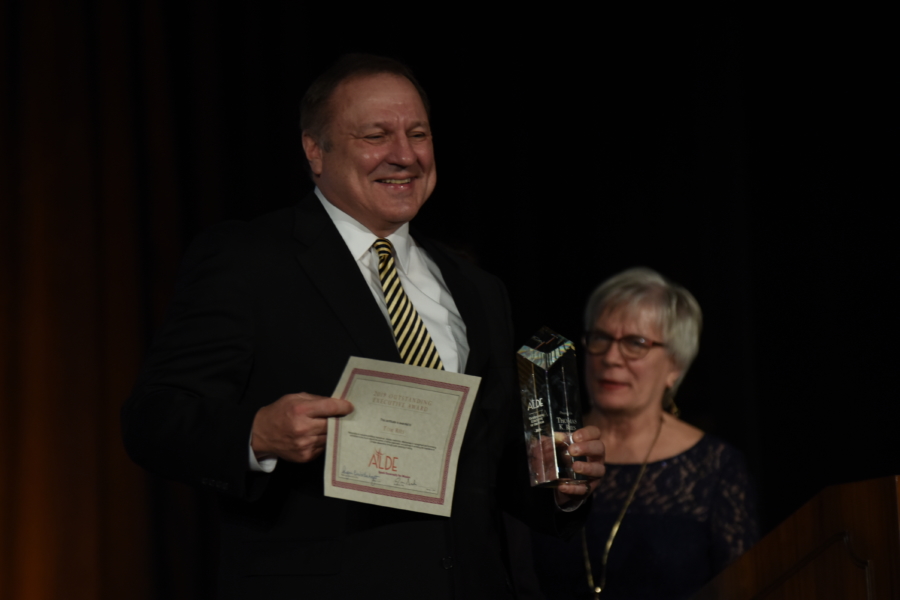 President Tom Ries was awarded the 2019 ALDE Outstanding Executive Director Award. The ALDE Awards for Excellence in Philanthropy recognize those who go above and beyond in answering God’s call to serve others. The Oustanding Executive Award is designed to honor a deserving CEO or president who serves the Lutheran church through good deed an example; attributes of the ALDE Outstanding Executive are visionary leadership, effectiveness in management and fundraising, inspirational leadership of staff and volunteer constituency, boldness in proclaiming the importance of Christian stewardship through public speaking or writing, and commitment to the mission of the church beyond the sphere of his/her organization.

“It is an honor and privilege to present the 2019 ALDE Outstanding Executive Director Award to The Reverend Dr. Tom Ries.

Tom has led with clarity and vision and has served the church throughout his entire 38-year ministry.  He pastored two congregations and served as Assistant to the President and Vice President for College Relations at Concordia, St. Paul before serving seven years as president of the LCMS Foundation.

In 2011, Tom became president of Concordia University St. Paul.  Under his watch, the university has grown exponentially through innovative tuition strategies and a sound financial discipline.  He takes an active and dynamic role in development, emphasizing accountability to the Board of Regents for the achievement of specific goals and strategies. Tom developed a strong promise statement to the students, families, and the communities the university serves.

Tom has been a voice of advocacy for LECNA (Lutheran Educational Conference of North America), and served on the LECNA Board of Directors.  I first met Tom at the LECNA annual presidents’ meeting held in New Orleans when the college presidents participated in a day of service working on homes damaged by Hurricane Katrina.  Tom took the lead in his volunteer group, and I watched as he skillfully used the miter saw to cut and install flooring.

Tom has been a model of balancing Christ being honored in all we do. His leadership and commitment to strategic planning have resulted in unprecedented enrollment growth (increasing over 68% to more than 5000 students for fall semester 2018).  A significant hallmark of his presidency has been financial stability. A number of emerging and high-demand programs have been added, including two doctoral programs. Tom’s vision and leadership have also extended into the community at large in Minnesota by serving as chair for Minnesota Campus Compact, as well as serving on committees for the Minnesota Private College Council.  Tom is a leader who develops leaders.”