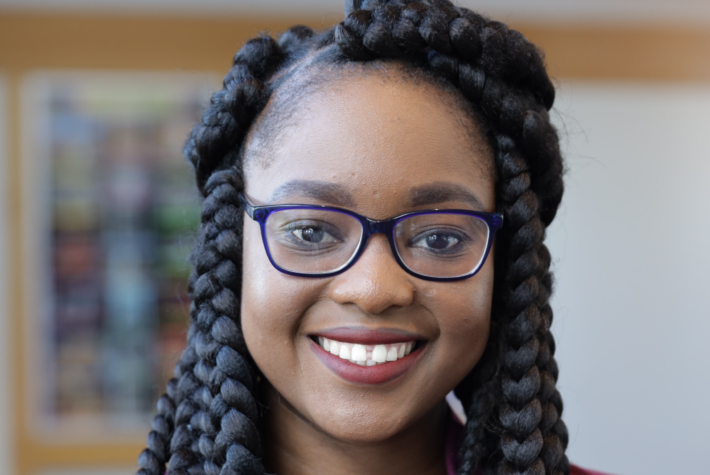 "I love the way they teach and make it more applicable to the real world. It’s more practical.”

Fatoumata Tembely lived in the Ivory Coast until she moved to New Jersey in 2011, but after a few years, she decided to move further inland to Mankato, Minn. She earned her bachelor’s degree in international business with trade, commerce, and management specializations from Mankato State University in 2016. After graduating, she decided to continue her education by pursuing her master’s in business administration (MBA) at Concordia.

One of the main reasons Tembely decided to go to school at Concordia was affordability. Another factor that was important to her was going to school somewhere closer to where she lived. Additionally, she had heard good things about Concordia and the MBA program from a friend who had gone there.

When asked what she valued most about her time at Concordia, Tembely said, “the education I’m getting. I feel like it’s not just a classroom where you come and it’s just lectures. It’s more for conversation between the professor and the students. It’s more interactive. It applies more to real business and the real world – it’s not just theories. I love it. I love the way they teach and make it more applicable to the real world. It’s more practical.”

Another thing she enjoyed about Concordia was its small class sizes. She loved having ample opportunities to ask questions and connect with her professors and classmates. Tembely commented about how small class sizes help to reduce the anxiety felt by students when they have questions by comparing it to her time at Mankato. She said, “You have better communication with professors and classmates rather than having 200 people in the class, and ‘I don’t want to ask because there are 199 people looking at me.’ That makes a difference.”

Tembely felt that going to a school in a diverse and urban area was beneficial in preparing her for her career. She was surrounded by learning and employment opportunities because of the numerous companies and organizations in Saint Paul, Minn. One of her goals upon finishing her program was to apply everything she learned, and the city has provided her with many opportunities to do so, such as working with the Center for Victims of Torture and the Family Enhancement Center.

Along with her career goals of working for either a nonprofit or for-profit organization that supports a social cause, Tembley hopes to spread awareness for sexual abuse through a book she has written. She explained that “sexual abuse in my country, and generally, in Africa, it’s a taboo subject. Victims don’t really talk about it; they keep it to themselves. They’re afraid, ashamed, or believe that people will make them feel like they’re not the victim, but the reason it happened.” The book will mainly target children from 8-12 years old and their parents, helping them recognize signs of abuse and how to prevent it. There are no resources like social services in Africa, so they’re also trying to create a line where the victims can call and get certain resources.

Tembely is currently working for Target as a Business Licensing Coordinator, where she uses her business administration skills to obtain and renew business licenses for different locations.