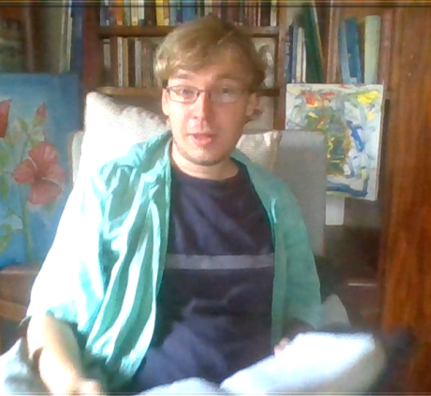 “Picture who your studies are going to benefit and let them be your incentive to give the extra mile to your studies."

Chippewa Falls native, Michael Rokenbrodt, came to Concordia eager to pursue an English and education degree and delve into the university’s theater and ministry programs. He was initially drawn to CSP after meeting Professor Emeritus Jeff Burhart at a youth gathering in Florida. Bonded by a shared love for theater, Rokenbrodt was attracted to Professor Burkart’s drama ministry program.

Ultimately, Rokenbrodt made the decision to attend Concordia after discovering the range of scholarship opportunities provided by the university, stating, “My family did not have the income to pay for my education, and I would not have been academically adept enough to hold a job at the same time as my studies. Thanks to the financial aid that was available, I was debt free within two years of graduation.” He was especially intrigued upon finding out that many of these scholarships were tied to his interests (theater, English, and church work).

Rokenbrodt graduated in 2009 with a degree in CommArts/Lit Secondary Teaching with Lutheran Classroom Certification. He says he came into Concordia with the same confidence about his English Education major as when he left, identifying himself as a lifelong storyteller since early childhood. “It has always been one of the stable constants in my life,” he says.

Studying literature not only prepared him for his six years of high school teaching, but also aided him in his decade-long work with camp ministry, as well as the last five years he has spent in Africa doing mission work. He says that in all three jobs, “the principal focus of what occupies me daily is related either to education or storytelling.”

The benefits of majoring in English are often present. Rokenbrodt specifically recalls an experience from his years as a teacher. “During my six years of teaching high school, I always felt bad for my colleagues in the photocopy room.  The stuff they needed to run off always looked so droll whereas my copies were usually things that gave personal excitement.  Society can function without advancements in math and science, but it will never function without dependency on stories and communication.”

While attending Concordia, Rokenbrodt pursued his passion for theater. He worked on the set and stage crews, as a cast member, and even experimented with playwriting and directing. Theater is something he has continued to work on since graduating. Currently, he directs an annual performance arts camp. He has also coordinated a traveling drama troupe and partnered with a mystery theater initiative (all of which have been Gospel-focused).

In addition to his theater work, Rokenbrodt worked in the Writing Center. He believes the one-on-one tutoring skills benefited him during his time spent as a high school teacher. Even today, as he continues his mission work in Uganda, he finds himself using the communication skills he developed while tutoring in the Writing Center.

Aside from extracurriculars, Rokenbrodt found himself benefiting from CSP’s small class sizes and devoted faculty. The small classes allowed Rokebrodt and his peers to get to know each other and express their ideas in classroom discussions

This same idea applied to his connection with professors, noting that they were always available to mentor him on topics both inside and outside of the classroom. English professor Dr. Beilke was especially helpful in guiding him through difficult assignments. He says after visiting her office, she was able to get him back on track. This is an experience he does not think he would have had at a larger university.

For students considering similar career paths, Rokenbrodt offers this advice: “Picture who your studies are going to benefit and let them be your incentive to give the extra mile to your studies and campus activities. The idea of my future students definitely spurred me on, as I knew my duty to them started even before graduation.”